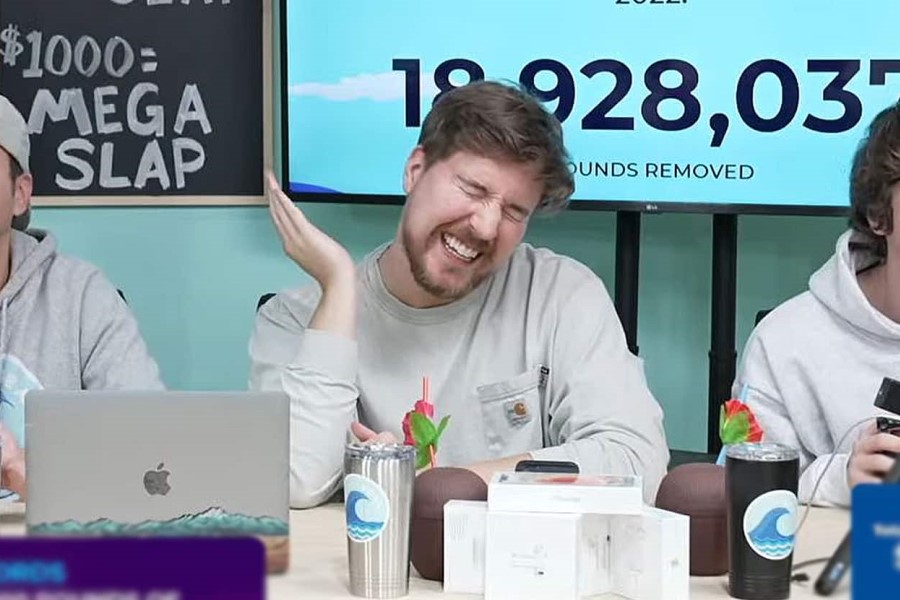 Recently, Jimmy “Mr. Beast” Donaldson and Mark Rober held a live stream to raise money for #TeamSeas, their joint enterprise dedicated to eliminating 30 million pounds of trash from oceans and rivers. Their goal is to raise $30 million USD by January 1st, 2022, at a rate of one dollar every pound of trash. The two of them and their colleagues slapped themselves over 42,000 times in the name of the charity as part of their fundraising campaign.

Depending on the sort of donation, there were three different types of slaps. A $10 gift earned a slap anywhere on the body, a $100 donation awarded a face slap, and a $1000 donation earned the “mega slap.” Other donation incentives included team members eating spicy foods or getting dunked in a dunk tank in reward for hitting particular donation goals.

Mr. Beast also announced during the live stream that a secret donor is matching donations up to $1 million USD, increasing the motivation for viewers to donate, since each dollar now contributes to cleaning up 2 lbs of ocean trash. As of the time of writing, the total amount raised via the live stream had surpassed $911,000, bringing the overall amount raised to 19.6 million USD.

Mr. Beast’s viral Squid Game video was sponsored by mobile game Brawl Stars, who donated $100,000 on their own, which was matched by an anonymous donor for a total of $200,000. Mr. Beasts’ team member received a massive slap and was dunked as a result of the donation.

The two major influencers launched their project in October of this year, and in just a few weeks, Team Seas had raised more than $10 million of their $30 million goal. According to the two, every $1 spent will result in the removal of one pound of trash. They even marketed the concept on Jimmy Kimmel Live, bringing it to the attention of the general public.

Humans waste billions of pounds of trash into the ocean each year, according to the US National Oceanic and Atmospheric Administration, with much of it originating from rivers. As a result of this pollution, a vast waste patch known as the “great pacific garbage patch” has formed in the Pacific Ocean. Several projects have been proposed in recent years in the hopes of cleaning up that patch and giving long-term solutions to continued ocean pollution.

Team Seas is a follow-up to Team Trees, a project in which Rober and Mr. Beast collaborated to plant 20 million trees. In 2019 and 2020, they leveraged Mr. Beast’s fundraising techniques, as well as Mark Rober’s engineering, to achieve that goal.

In 2021, Mr. Beast had a busy year, which featured the release of an IRL version of the popular Squid Game show, which surpassed Squid Game’s own views in its first month of release. Mr. Beast is well-known for his lavish and time-consuming content, as well as his philanthropy. He’s positioned himself to be even greater in 2022.

Mark Rober, on the other hand, is well-known for his viral engineering projects on YouTube, such as his spiteful glitter bomb parcels and squirrel obstacle courses