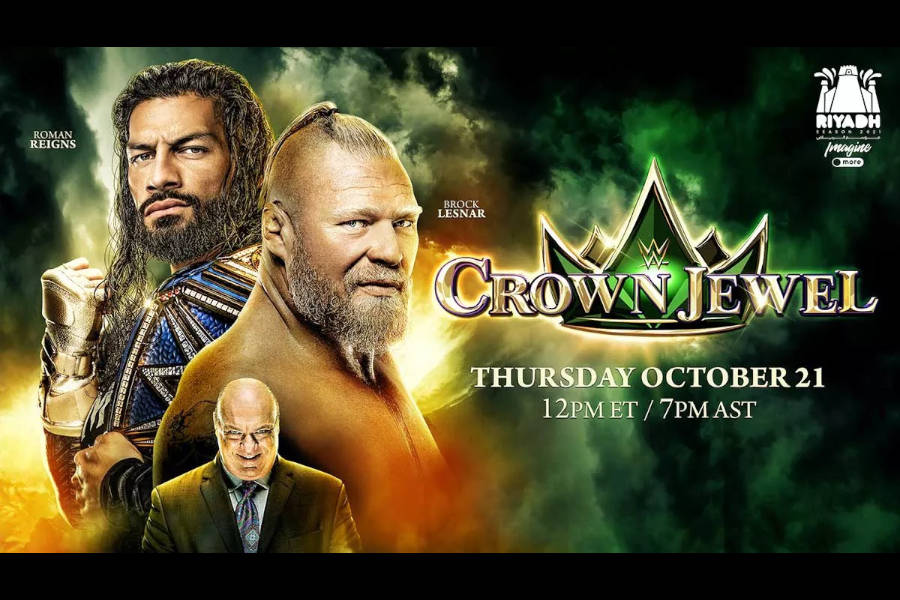 The Beast has returned! Brock Lesnar, the sentient action figure, returns to the ring at Crown Jewel to face Roman Reigns for the Universal Championship. Becky Lynch defends her SmackDown Women’s Championship against Bianca Belair and Sasha Banks, Edge, and Seth Rollins face off in a highly anticipated Hell in a Cell Match, Finn Bálor and Xavier Woods may just steal the show when they meet in the finals of the King of the Ring tournament, and the Mega Powers erupt once more as Big E defends his WWE Championship against former title-holder Drew McIntyre.

Crown Jewel airs at what time today? On Peacock, how can you watch WWE Crown Jewel 2021 live? Everything you need to know is right here.

WHEN DOES THE WWE CROWN JEWEL BEGIN TODAY?

Peacock is the WWE Network’s exclusive streaming home in the United States, you’ll be able to watch Crown Jewel only if you subscribe to Peacock Premium ($4.99/month or $49.99/year) or buy the event from your cable provider. Peacock Premium Plus, which has fewer ads and costs $9.99 per month or $99.99 per year, is also available.

Peacock is available on Android TV, Apple TV, Roku, Chromecast, PlayStation 4 and 5, Xbox, and other platforms. Peacock can also be viewed via a web browser or a variety of cable providers’ set-top boxes (Cox, Contour, Xfinity).

The Peacock app is available on Google Play, iTunes, Roku, and other platforms. On the WWE website, you can find more information.

CAN I SEE CROWN JEWEL ON THE WWE NETWORK LIVE?