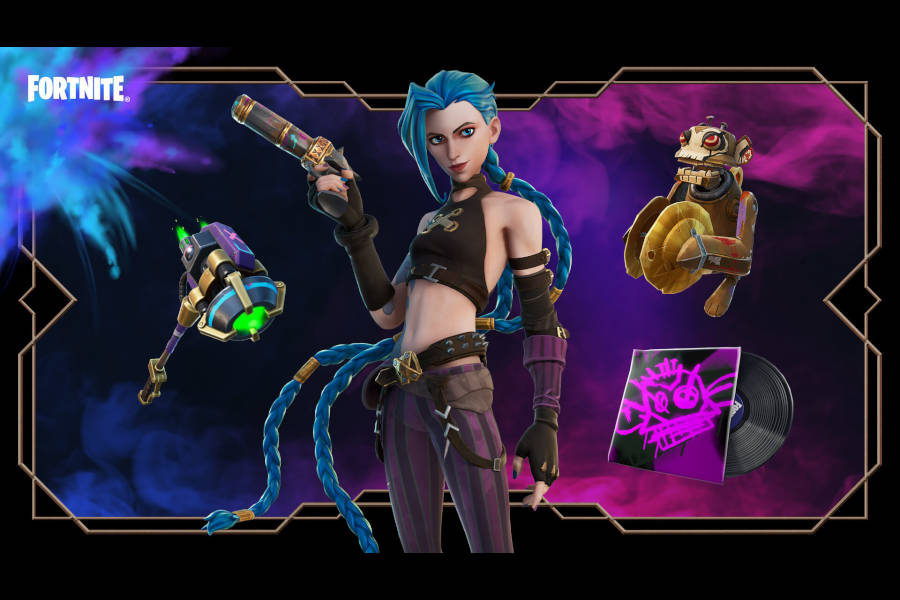 Chapter 2 was recently been released and Fortnite collaborations it is all about and with video game titans like Master Chief and Kratos already in the game, it’s only natural that more will join Fortnite because of its features and just about any collaboration you can think of, like book crossovers and something from one of the most popular video games of all time makes a lot of sense.

A character from League of Legends that will appear in Fortnite is none other than a fan-favorite character Jinx where she’s shaping up to be one of the game’s coolest skins yet.

After Fortnitemares and the Dune collaborations, one might wonder how many more cool skins could be added to the game, but Fortnite keeps surprising us.

Using a popular character from Riot Games’ obviously smash hit video game helps, and this said skin is sure to be one of the most popular yet. Let’s take a look at what we’ve got.

If you’re a fan of League of Legends’ mischievous hero, you’ll enjoy this collaboration. A League of Legends character in another video game Fortnite may be difficult to imagine because of the two games’ drastically different art styles, but once you see it, it makes perfect sense.

Fans who are all interested in seeing the skin in action can do so on Ninja’s or TheGrefg’s Twitch channels where they will be playing Fortnite together and demonstrating the new style so that players know exactly what they’re getting into if they decide to buy it.

It’s not just the skin you’re getting, as is the case with many cosmetics released in Fortnite. Pickaxes, music packs, and other similar items are the real treat here.

The exact amount is still unknown when it arrives in the Item Shop, but bundles typically don’t cost more than 2,500 V-Bucks, so it’ll be somewhere in that range. It will most likely be less expensive for someone who only wants the said skin.

Since November 4th, 2021, Jinx has been available in the shop.

Epic Games Fortnite Twitter account was changed before the official announcement. They first changed their profile picture to a standard F, but it was overlaid with swirls.

The header image was the same, but next to Carnage was graffiti of a monkey. This may not make much sense to casual Fortnite players, but when you consider that Jinx enjoys wreaking havoc and leaving a trail of destruction in her wake, the picture becomes clearer.

The teases appear to be aimed at League of Legends players, but there is a lot of crossover between the two player bases, and given how popular Fortnite has become, it was only a matter of time before the two gaming titans teamed up.

A Netflix show premiered on November 6th that resulted in a significant increase in viewership.